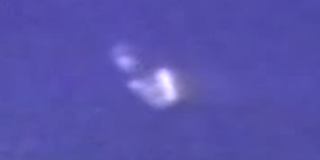 Published on Jan 5, 2017
On January 28, 1986 despite the warnings of engineers not to launch in freezing temperatures, NASA management chose to launch Space Shuttle Challenger. The result was the loss of 7 astronauts in a horrific explosion 73 seconds later when flames from a solid rocket booster leak from a cracked o-ring and burned through the main fuel tank. The solid rocket boosters remained intact after the explosion and continued on out of control before mission control sent a self destruct signal to them so they could not cause destruction on the ground.

Also check out these other Space Shuttle Challenger videos...

Inside Space Shuttle Columbia STS-107 During The Accident
https://youtu.be/rvG8A4g0gEY

So Close To Home: Tribute To Space Shuttle Columbia STS-107
https://youtu.be/JgmVDWpO9TA
Posted by BlArthurHu at 8:10 AM No comments:

How America Turned Against Smart Kids

links to my website, I don't necessarily agree with everything here but brings up good points of when equity means helping top 1% kids.
(To put these numbers in perspective, the average IQ of a white or Asian student at MIT, by one estimate, is 138.)

How America Turned Against Smart Kids

Public school officials in St. Paul, Minnesota are learning first hand that the "Model Minority" image of Asian Americans indeed is a myth. According to school ...

Public school officials in St. Paul, Minnesota are learning first hand that the “Model Minority” image of Asian Americans indeed is a myth.

MAY 7, 2015 EMIL GUILLERMONBC NEWS
Public school officials in St. Paul, Minnesota are learning first hand that the “Model Minority” image of Asian Americans indeed is a myth.
According to school records, Asian Americans, the largest racial group in the St. Paul schools have impeccable attendance records and the fewest suspensions. But in the important benchmark of standardized testing, those same students are falling far short compared to the district average.
City data showed Asian American kids are less proficient in math — 38 percent pass the Minnesota Comprehensive Assessments (MCAs) vs. 59 percent of Asian American kids statewide, and similarly lag in reading — 29 percent pass MCAs vs. 51 percent of Asian Americans statewide.

Asian/Pacific Islander students alternatively, lagged between 9 and 16 percentage points behind, slightly narrowing the gap between their white peers.
Black students remain the furthest behind and saw the least change over last year’s scores, though the group’s reading scores improved from 32 to 33 percent proficient. 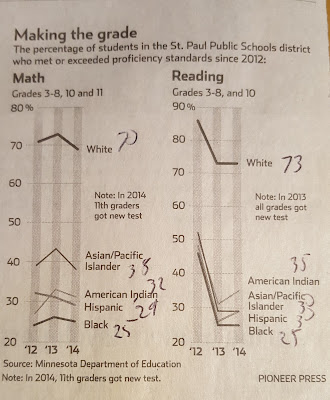 Posted by BlArthurHu at 8:51 PM No comments:

All groups dropout rate is about twice rate of whites

Asians have dropout rate about 25% less
Posted by BlArthurHu at 10:50 AM No comments: